The History of the Camera Obscura Visitors in 1891 were the first to see coloured moving images on a flat screen - decades before the colour film cinema was invented and a long time before moving images were seen. Prior to the current camera obscura opening for the summer season of 1891, previous and more basic single-mirror examples existed at Port Soderick and the Victoria Tower at Strathallan Park, which had also been referred to in some earlier advertisements in the Mona’s Herald newspaper as simply the “Strathallan Tower”  in Douglas

A simple timber shed “which doubled as a Camera Obscura during the summer” was located somewhere near the current position but that was burnt down in October 1887. Mr S H Hicks who also owned and operated the camera obscura at Port Soderick was recorded as actually living in the one on Douglas Head at the time it caught fire – reportedly because he left an unattended oil lamp burning!

Another camera obscura was planned for Douglas at this time – to be installed on the Douglas Eiffel Tower. This was to be constructed as part of a Douglas Harbour suspension bridge project and was to sit atop a huge cast iron rotunda which enclosed an internal helter-skelter style carriage ramp which was planned to take carriages up an internal curving slope to the end of the suspension bridge which was to link across the harbour. This was to be located where the Steam Packet Car Park used as the Covid checkpoint currently resides.

The Great Union Camera Obscura, invented, patented and initially operated by John Richard Fielding, originally of Rochdale, was opened in the summer season of 1891 with 12 viewing tables, but he reduced this to 11 by blocking one up and creating an in-out route by adding the small office to separate arriving and departing visitors. Admission was 2d - the equivalent in 2020  to £1.08.

How it Works - “Imagine the 130-year-old equivalent of 11 modern horizontal flat screen colour TV’s but with no electricity involved - and if the sun goes in, the picture disappears!” That is the description often given to children on arrival to explain the simplicity and wonder of what this facility provides.

As you enter it you are guided around a corridor with low white viewing tables on your left onto which the pictures are projected. They are divided off by partitions to  present separate views.  If a ship leaves the harbour or a gull flies past, you will see it as the images are ‘real time’

The camera obscura works by reflecting light from vistas surrounding the building through mirrors in small turrets on the roof down towards the white tables below. The light passes through a lens mounted just below the mirror, which reverses the reflection and focuses it on the tables – presenting 11 colour, moving real-time images of the surrounding headland, promenade, Tower of Refuge, Onchan Head, Lighthouse and out to sea. Because this works on reflected light, if the sun goes in or is obscured by dark cloud, the light levels plummet and the pictures virtually disappear. 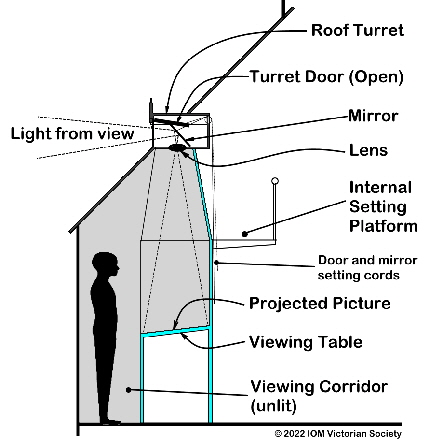 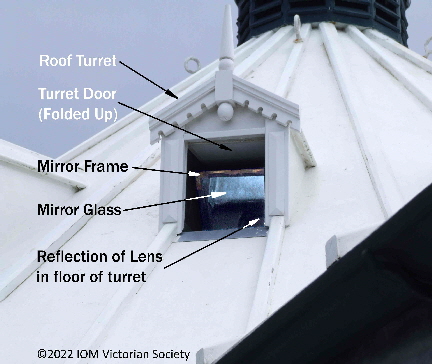 Three rare Interior photographs of the Camera Obscura. This part is not open to the public but shows the ingenuity of Mr Fielding where he constructed the viewing tables and internal adjustments gallery with the mirror turrets extending inside the roof-space.

The left view shows the interior backs to the viewing tables with the mirror and door adjustment ropes and the mirror angle setting view-holes.

The Centre view shows the ladder up to the settings and adjustments gallery platform - the handrails are a modern addition!

The Right view is of the backs to two of the turrets containing the mirrors and lenses. 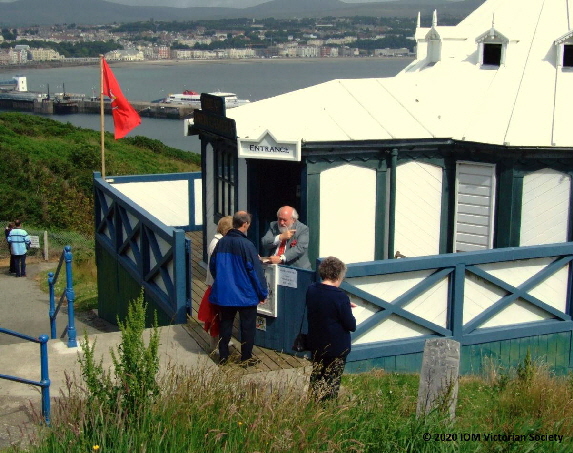